Black screen when logging in? Join our Discord and speak with a staff member. #StayHome #Quaratine2020

I have wondered since I joined this server a few weeks back how many players are ACTUALLY OG Scapers!!! I remember whwn Rune Armor was introduced on RS!!! I remember BEFORE Zezima was a top player! The top player at that time was ALWAYS BlueRose13x, and she was also the first to be able to smith full rune EVER! I also remember before there was a wildy! AND, when the WHOLE WORLD was PvP and you had to choose whether you wanted to have all PvP or no PvP! Lmao...Ahh, the good ol' days! Haha...Anyone else an OG like me?!!?

I have wondered since I joined this server a few weeks back how many players are ACTUALLY OG Scapers!!! I remember whwn Rune Armor was introduced on RS!!! I remember BEFORE Zezima was a top player! The top player at that time was ALWAYS BlueRose13x, and she was also the first to be able to smith full rune EVER! I also remember before there was a wildy! AND, when the WHOLE WORLD was PvP and you had to choose whether you wanted to have all PvP or no PvP! Lmao...Ahh, the good ol' days! Haha...Anyone else an OG like me?!!?

I started playing a little after R2H were introduced I believe. I do remember BlueRose13x, Pker Dude Jr I think was his name, The Old Nite... Other names I can't remember but would recognize if I saw them.

PDJ, Haha!
Still one of my best friends on RS to this day.  Talk to him almost daily.

Funny. Most memories I have are either pking, scamming players or autoing.

A few from me.  From selling cakes at the wildy, or staying up all night training.. just so many. Meeting the guys who lived on my street who played being like - Meet you in world 1 man!

1) I had some how scammed my way into getting a player to let me use his his ranger - 80 range level 55ish - name "O its Butters"  - either through "let me use your account, etc." Sure enough, no recoveries were set and the rest was history. The needle scam and leading people to the wilderness, all classics.

2) I actively pked and autoed regularly but would get banned on and off. Funny story relatable to this server - I would PK with Pyru in real RSC. A friend of mine from real life would actively write script for his bots and we would be online buddies.

3) After meeting someone while pking, he got me a perminate authorization (which cost like 250m or hundreds of dollars) to autorune and ixbot. These bots I autoed for weeks on end without looking at them. These were the best bots, and I became active in the autorune community. After years of using the bots and selling atleast 25 different characters ranging from pures - to 85 mining chars, 1 65 1 80 magic, 40 1 90, lvl 76 stakers etc, I was banned from autorune for sharing my authorization (I believe I had a shared one). Anyways, I went on a hacking back spree because there was a way to unset the recoveries so it looked clean. When I hacked the chars back - some had almost 99 everything and wack stats. Some got locked because of the constant challenging back of the chars.

4) I was also the victim of scams - I paid gp for members and the seller canceled their creditcard and made my character banned from using creditcard and until I paid the back dated days I owed.

PDJ, Haha!
Still one of my best friends on RS to this day.  Talk to him almost daily.

No clue he still played lol

Yea. PDJ is a really good guy.  I still talk to Lightning, Doe Slayer, Jamie2002 and even said hi to xxcavalierxx a few months ago when he randomly logged in.  Lol.
Keep in touch with a lot of the old players that still play.

Questions or concerns? Message me via Discord, forum, or in-game.
New to RSCEmulation? Refer to this guide for supportive information.

Im also a runescape classic veteran. I was in game for all holiday drops. Anyways i still play because of the nostalgia its fun.

Have any questions? Message me via Discord, forum, or in-game.
RSCEmulation Noobie? Click this link out.

I played back when it first came out and you could pick between a warrior, ranger, or mage. I used to play on World 4 when it came out. Also tks was #1 at this point (Tina Kaye)
There was good magic and evil magic, and a skill called Carpentry that was level 1 that you could never train.
Then there was the intro of membership and you could buy monthly or lifetime (although I cannot find any proof of this on the web or archives.. but strongly remember you had the ability to buy lifetime membership for $60).
Membership didn't really have much content so wasn't worth the extra fee at first.
Then the duper appeared and the price of pink phats went from 4 mil to 400k that day.
Also rune large helms were 100k each, R2H's were 250k.

I used to battle Elvarg and never win.. then my friend wanted me to show him so he sat behind me and I went to fight Elvarg and survived with 6hp and no food.. killed him using my rune long, addy plate (maybe rune chain?) and addy legs. I went from 47 str to 48 and a few xp from 49, along with some atk and def levels I believe.

Charcoal was a scam that came out when the digsite quest was released. People from members collected charcoal and traded it on F2P worlds for 5k each.. because for some reason it was the only P2P item that was tradable to F2P but you couldn't use it.
People used to trade in Varrock Square and the rich people would chill/trade left of the castle in varrock.

I also remember spending 2 hours at a friends house scamming a pair of black legs off someone.. the scams would go like this. "hey wanna join a clan?" "first you must pass a test, a trust test" where they trade you an item and you give it back, eventually logging off and hopping worlds with the final item.

At one point I tried botting but there was a keylogger built in, and the person trained my 1 defense pures to 11 defense and trained some magic on them. 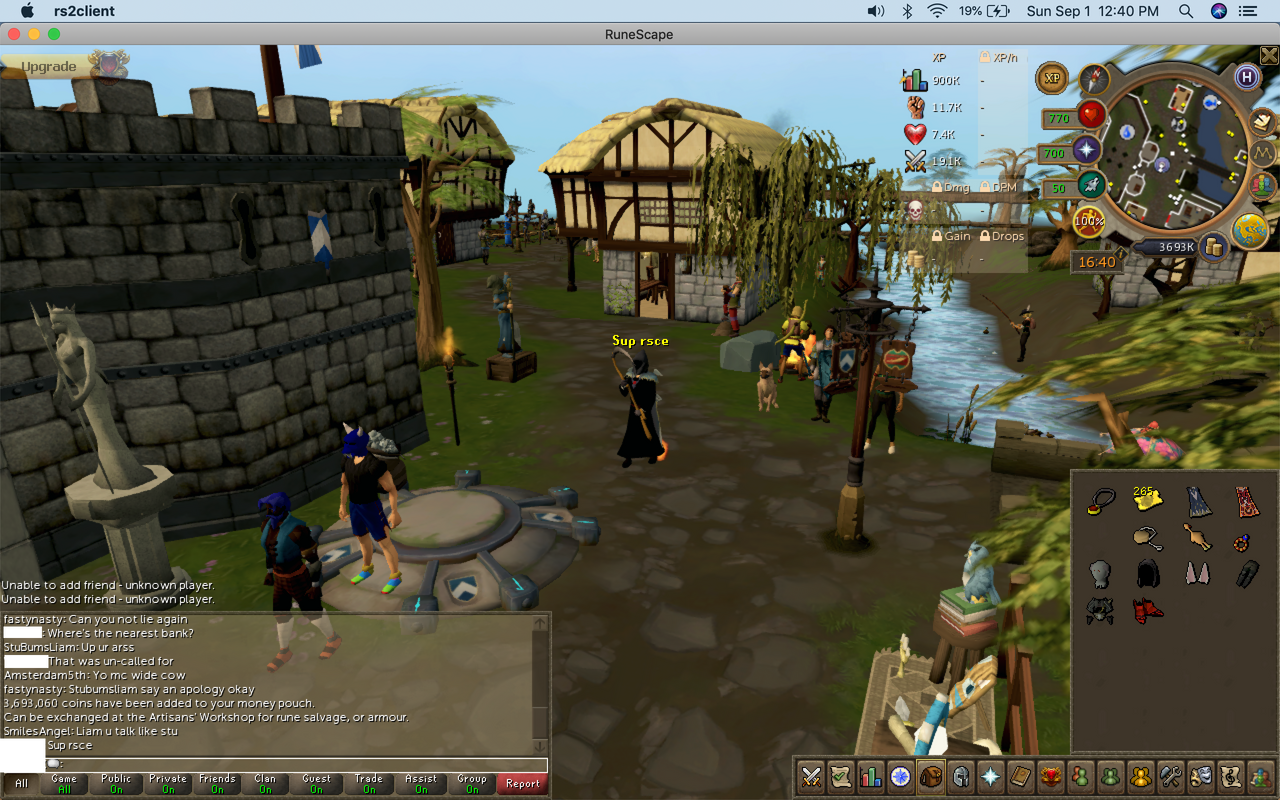 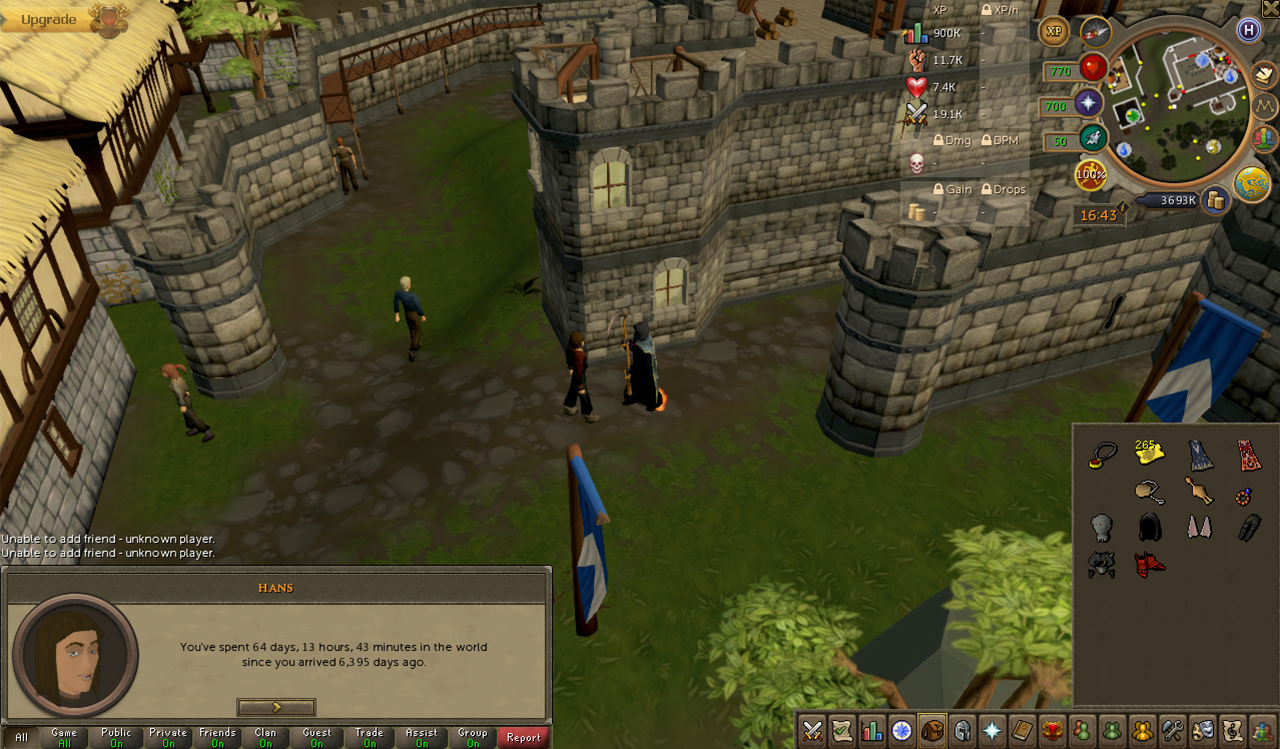 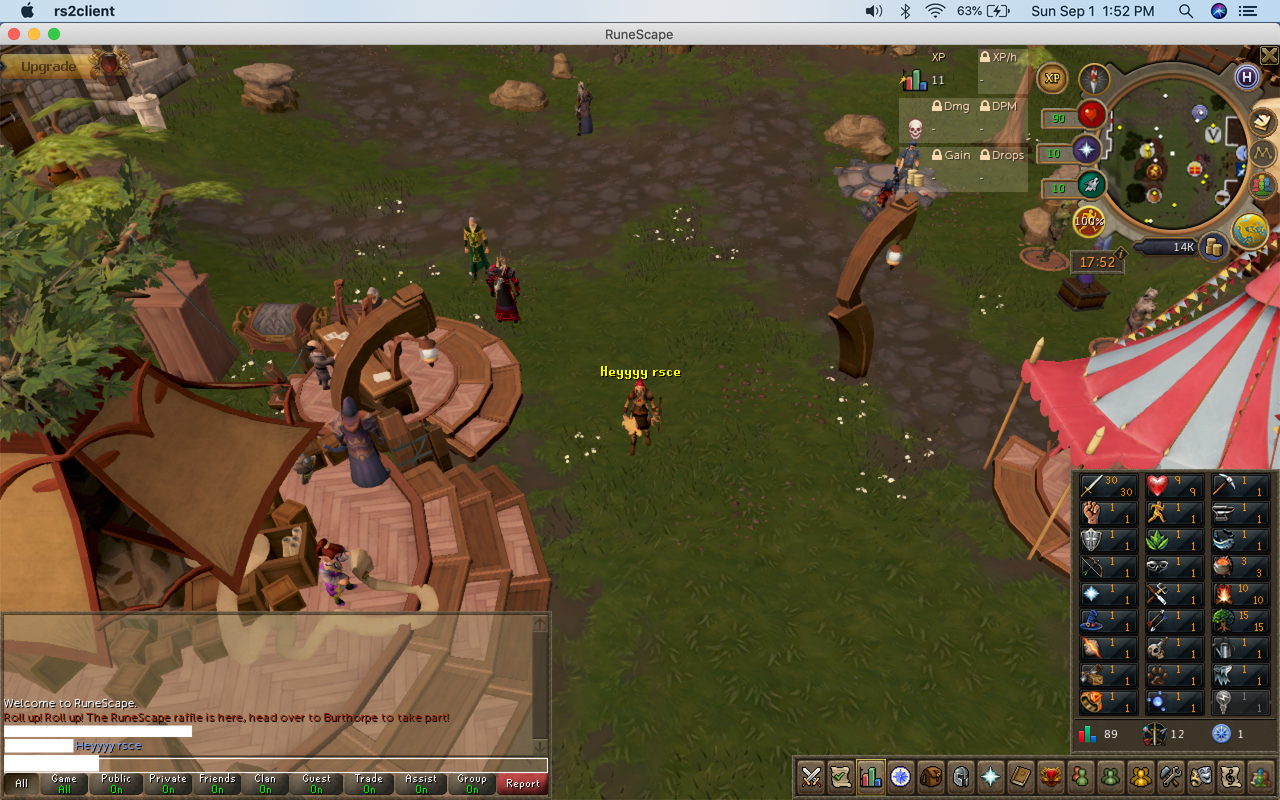 Here is an old video that someone uploaded back in the day (2001/2002) that's been re-uploaded "the first rsc videos ever". If you click their profile you can find another, and there were a total of 3 but this guy only uploaded 2 of them.

Draynor  all the stakers lives
and I personally hung out in Falador if not trading at varrock castle.
From what I recall everyone hung out in edge trying to find zezima or pkers, idk I was never really there until rsps came out.

Thanks for the post haha I remember that warrior mage ranger thing wasn’t there miner too or something like that?

I’ll add a story too from classic days;

When I was a newb(and currently still am) I ventured into the varrock wilderness looking for the bar by the wilderness. Probably for the quest.

Needless to say, I had almost everything I owned on me and got lost, wandering into the wilderness;
Including my only rare at the time, a Santa hat gifted to me by ladykilljoy (ran into in catherby one day) and I didn’t intent to lose it.

Almost immediately, I stumbled across 3 pkers high level with rune and PARTYHATS haha. They had told me I was in the wrong neighborhood and directed me out. Not before offering a pink party hat for my santa. Which I declined and explained it was more than pixels that hat.
They told me phats were so cheap they could pk with them and the three dominated so well there was little risk.

From there, I began my adventure collecting hats and selling in varrock castle garden. Never forgot the 3 phat pkers

There was another time I went into the wild as a newb saw a guy on the nature spawn island with a black phat. Realizing, “Andrew” couldn’t be attacked from there I stopped to investigate and he shot me with a crossbow to Lumbridge. I didn’t learn until a year or so after who that was and black phats didn’t exist haha

If you're in the wilderness, with only 3 items to wear, don't worry my precious, I have much to spare! For Thorn, your friend, will bring loads of gear! STR pots! Anchovie Pizzaa! Powerful, diamond, ammulets! Brave AFKs never fear! Look around, down on the ground, many useful items can be found!
Gotta runnnnn!!11onepizzaa!